Inside Israel: Hi-Tech Haredis Leading the Ultra-Orthodox into the Future

The dusty and dishevelled road marking the city limits of Greater Tel Aviv runs parallel to one of Israel’s major modern highways. A series of industrial plants seem to roll into one, the sole landmark being a gigantic red interpretation of a soft drink can that towers above the single-story factory roofs.

Why advertise with us

It feels a world away from the manicured lawns of Israel’s clinical hi-tech campuses across town. But on the outskirts of this small city or large town, a quiet economic and social revolution is taking place in the technology sector.

Beside the multinational’s production plant, stands an unremarkable five storey glass-fronted building. Stepping inside, away from the smothering early autumn heat, a bored security guard directs me to the second floor where I’m meeting with some of Israel’s most surprising hi-tech entrepreneurs.

Yitzik Crombie, founder of iSale, greets me with a warm smile and a firm handshake. We are soon joined by Racheli Ganot, a fellow hi-tech entrepreneur, and we sit down in her office. Both Crombie and Ganot have founded hi-tech companies and both also define themselves as Haredi, meaning they come from Israel’s ultra-orthodox Jewish community.

From Yeshiva to Silicon Wadi

The men from this part of Israeli society are known for their devotion to studying the Torah, Judaism’s holy book, while women are traditionally left to bring in some income and raise the children.

“I was 20, I finished yeshiva. I’m a rabbi, I finished my studies to become a rabbi and then I decided to work in the hi-tech sector,” Crombie deadpanned, as if it were as natural a decision as choosing to wear socks in the morning. Noticing my raised eyebrows, he breaks into a wide grin.
Yitzik Crombie addresses wannabe entrepreneurs in JerusalemiSale. “When you finish Jewish studies and you want to work in the hi-tech sector, you have a lot of things to learn,” he said with cheery understatement. “I learned in yeshiva, without learning English, maths or nothing, just Jewish studies. There were no people around me that joined the hi-tech sector, I was not the first one but I was lonely. No friends that could help me, there was no eco-system.”

While Haredi boys are devoting their entire conventional education to Jewish studies, Haredi girls are learning some maths and English, although attainment levels are well below Israel’s state education system.

After completing her obligatory education, Ganot competed a BSc in computer science before launching her own company, developing microchips.

“I founded Rachip seven years ago to assist women who want to work in a Haredi environment,” Ganot said. It now employs 80 female engineers at two sites in Bnei Brak and Haifa.

“At the beginning the market didn’t accept the idea of the Haredi women engineers,” Ganot said. “On the other side the Haredi engineers had concerns about working in the hi-tech industry, how they manage to keep the Haredi rules and lifestyle. So in the beginning I used to be a kind of bridge between the worlds, explain added value, the way and conditions of working together.”

In Rachip’s case, the environment means flexible working hours tailored to each staff member’s family situation. It also involves kosher food, kosher internet and personalised touches such as windows or screens to block sightings of any men who happen to come through the office. The personalised work place means that employees receive a lower wage than they would in the regular private sector.

Engineers work at Rachip, a haredi women-only tech companyRachip
“Our engineers agree to get a lower rate, which is still very high in the Haredi sector, because the lifestyle is lower than the average in Israel. We also get an incentive from the government, so we can get a lower price for our customers,” Ganot said.

The Israeli government covers 20% of costs of training new Haredi workers, a grant that gradually shrinks over a 30-month period as a new employee integrates into the workforce. However, both of the entrepreneurs believe the government should be doing more to invest in this rapidly growing segment of the Israeli population.

In 2010, around 11% of the population identified as Haredi, according to the Myers JDC Brookdale Institute think tank, who reported the share is set to increase to 18% by 2030. While definitive data is hard to come by, there seems to be consensus that the birth rate in the ultra-orthodox community has grown at a faster rate than that of those who identify as Jewish.

With the country’s hi-tech sector continuing to grow at a steady pace, Crombie and Ganot want to capitalise on the opportunities that the industry offers to the Haredim community.

Two years ago, the pair founded the Haredi hi-tech forum, a voluntary organisation that aims to help bring other entrepreneurial Haredis into the hi-tech sector. The forum has hosted conferences, courses and networking sessions, bringing together ambitious Haredis who want to work in Israel’s booming hi-tech sector.

“At the first conference, we were looking for successful entrepreneurs to tell their stories.We only found four entrepreneurs,” Crombie said chuckling. “We didn’t find success stories.”

By the second conference, a year later, the pair had received more than 40 requests from Haredi entrepreneurs to tell their stories. “We see the potential. When we started two years ago there was no ecosystem at all and now we see a lot of entrepreneurs that want to join the sector. We’re very proud of it,” he said.

Less than half of Haredi men are employed, with the majority engaged in religious duties like studying the Torah or teaching.

This is a fairly recent trend in Israel. Over the past three decades, the employment rate among Haredi men has plunged from around 90% to its current level of 48%. The decline was preceded by the increased influence of ultra-orthodox parties in Israeli politics.

Successive governments offered ever larger state subsidies for ultra-orthodox families including housing benefits, while the group had been exempted from the mandatory national service that other Israelis completed after high school. The Haredi education system, known as yeshiva for boys, is independent of the state and its teachers are not obligated to train boys in core subjects like English, maths and science.

The gap in culture, wealth and lifestyle between the secular and ultra-orthodox Jewish Israelis is vast and the bus trip from Tel Aviv to Bnei Brak showed the divide in microcosm. Leaving behind myriad chic galleries, coffee shops and hipster bars of Tel Aviv, beyond the central train station, the city bus deposited skimpily dressed Israelis, returning home from a trip to the beach, picking up ever more black-coated men on their way to the closed community of Bnei Brak.

Ultra-Orthodox Jews take part in a ceremony of lighting the first candle for the holiday of Hanukkah in Bnei BrakReuters
Yet, dress code and haircuts aside, the most striking difference between the start and end point of the half-hour bus ride is the level of wealth. Most of the buildings in Bnei Brak appear to be in various stages of decay, their outer-walls stripped to reveal differing shades of grey.

The sizeable state benefits previously afforded to the ultra-orthodox have been chipped away at since Israel’s current prime minister held the finance ministry portfolio in 2003. With state support shrinking, the Haredim actually have little choice but to seek employment.

Crombie and Ganot believe they have identified and pioneered a way in which the Haredim can find employment without compromising their religious beliefs.

“If you work in the hi-tech sector, you can stay in Bnei Brak. You can go to the synagogue at the beginning of the day and then go to work and you can still be Haredi and stay in the community. The future is in hi-tech.” 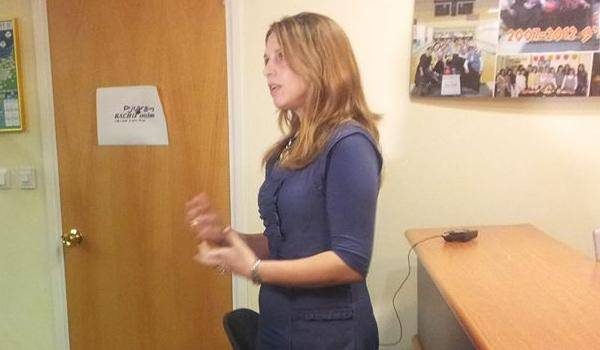 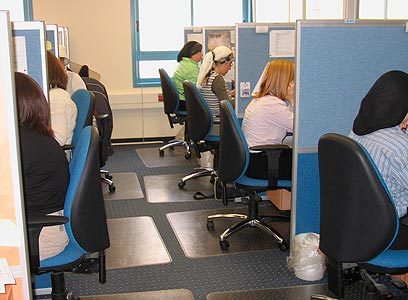